Showing posts from January, 2009
Show All

A bit of Color 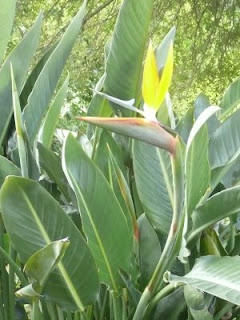 I love these in-between-the-rain days! Luckily the rain stopped to give the grounds a chance to absorb some more of the water because there is still some more to come. The colors are slowly but surely coming back and you can clearly see the sweet force of nature in
the flowers that are promising spring. Here are some samples of the plants starting to bloom in the garden.

- January 23, 2009
This week I received beautiful winter scenery pictures from a client in Finland (Kiitos Terttu!). Everything was beautiful, covered in snow, white. What a contrast to our winter in Sintra! Or is it? Do we have White in our winter?

Earlier on the week the cold returned. In the morning everything was covered in frost, the green grass had a white coat of ice, heavy, bending the grass down.
Later on the day we had a hail storm. 5 minutes of large hail and everything was covered in white - the cars, the roads (yes, loads of accidents), the landscape. I rushed home (slow rush) but by the time I got a hold of my camera, it was gone. But for 5 minutes Sintra was white.

The next day everything was white again. The fog was so heavy that it felt like you were sitting on a theater stage instead of your kitchen - but a bad stage: looking out the window all you could see was white, as if someone had forgotten to paint the scenery behind the windows. It was what you call 'peasoup fog', o…
Post a Comment
Read more

- January 18, 2009
In the middle of the winter rains we had a day of brilliant sunshine yesterday. Perfect weather for being outside, I was weeding the garden in a t-shirt. In a sheltered area, the temperatures can rise to over 20 degrees in the early afternoon, even tricking a young tree: we have a young almond tree ready to bloom. A bit too early, but there's nothing one can do to avoid it.

This week we installed a new router. Now there is a stronger WiFi signal all over and your own laptops should access the net from the rooms. We still do have the guest computer available, though, for those guests who do not want to carry their own computers to holidays.

This week I posted new special deals for February on our site:
a two-day weekend for 75 euros, or
a 'third night free'-deal for during the week.
Perfect getaway-gift for Valentine's or Carneval!

A day on the beach (Praia Grande) 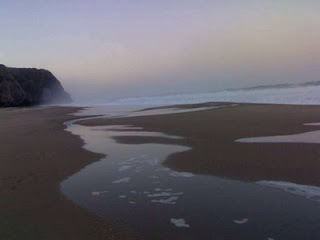 I like the beach in the winter. I go early morning, 7:00-8:00 when there is no-one else. Just me and the dogs. And the birds. And the sun rising. It is usually really beautiful, especially in the winter. There are often rivers formed by the tides, the waves are wild and the colors are soft pastel, reflecting the early morning sun, with the mist rising form the waves. The other day I went both in the morning and the afternoon - seeing both the sunrise and sunset. Incredible!

As I left the beach in the morning I saw the bus arriving. It is wonderful how even in the winter there is a service so people without a car can also take advantage of a morning stroll on the beach. Great way to start - and finish - the day!

Casa do Valle is now #1 B&B in Sintra in the Tripadvisor!

- January 04, 2009
As I often do, this weekend I checked on the sites we are listed on, how we appear, updating the information and checking out any comments we have received. In tripadvisor.com I noticed that with the latest 5 star comment, Casa do Valle climbed to 1st place in the Sintra B&B list! Thank you so much everyone for your positive comments, it is nice to know what we are doing right - and yes, also nice to know where we should improve. So please keep commenting, this blog is a great place for that, too! It is so important to us that our Guest House serves you well.
Post a Comment
Read more

- January 04, 2009
Somehow one would think that with all that rain we have had recently, everything would be clean as rain waters wash any dirt out. Wrong. The rain waters have just brought dirt in. We have spent all of Saturday cleaning and scraping & brushing and scrubbing the outside stairways and patios. I must say it looks different now - no more black dirt stuck on the stairs or leaves glued on to the patio. It took the whole day, but it is a joy to watch the result. Today the internet house was cleaned inside and out, and tomorrow we 'attack' the curtains of the rooms.

As we are in the low season we take advantage of the possibility to deep clean the rooms. Two by two we wash everything from duvets to ceilings. The plumber will check the pipes, the painter will re-do some walls with luggage marks on them etc. Some new towels will be replacing older ones, some pillows will be substituted, new glasses will be put in.

It is a good time to reflect and recuperate. Any ideas will be m…
Post a Comment
Read more

Though holidays are over, Sintra is still full of visitors. We had wonderful weather for Christmas, but unfortunately, right after the rains restarted. The lawns feel like a marsh, flower beds remind me of small ponds, the swimming pool is overflowing and the streets are crowded with colorful umbrellas. One of our clients showed me beautiful pictures taken in between the rain by the Capuchos Convent and the Moorish Castle as the mist rises from amongst the trees giving the mountain the mysterious look it is famous for.

A big 'thank you' for our Russian guests Elena and Igor who kindly provided us with the GPS coordinates that work for our location (N 38.80057º and W 9.39373º, Location Format hddd.dddddº). Many guests have indeed told us before that our location is not easy to find with the GPSs. I am not sure if it is because of all the 1 way streets or because our road has two sets of numbering. In either case, now there should be no problems!
Post a Comment
Read more
More posts